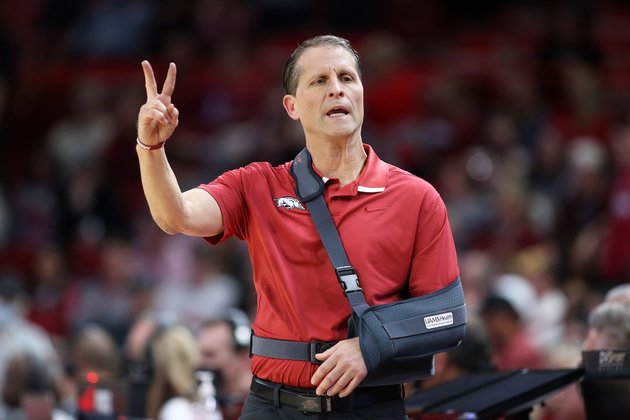 Arkansas slips past Texas AM in overtime

JD Notae finished with 17 points while Jaylin Williams totaled 14 points and 11 rebounds to lead host Arkansas to a 76-73 overtime victory over Texas AM on Saturday night in Fayetteville, Ark.

Arkansas (14-5, 4-3 SEC) won its fourth consecutive game and dealt the Aggies (15-4, 4-2 SEC) their second loss in a row after they had won their previous eight games.

Wade Taylor IV finished with a career-high 25 points and made a pair of free throws with 5.5 seconds left in the extra period to pull Texas AM within a point.

But Davonte Davis took the ensuing inbounds pass and delivered a perfect cross-court pass to Stanley Umude, who dunked it with nine-tenths of a second remaining. Umude finished with 15 points and seven rebounds.

Texas AM's Hassan Diarra's 3-point attempt at the buzzer at the other end hit the side of the rim, sealing the win for Arkansas.

Diarra made a big shot earlier in the game, though, when he tied the game at 64 with a 3-pointer with 9.1 seconds to go. It was Diarra's first points of the game and only his fifth made triple this season in 13 attempts.

Texas AM took its first lead of the game with 4:12 left in overtime on Marcus Williams' fast-break layup.

After falling behind 68-66 with three minutes left in the extra period, the Razorbacks scored six consecutive points, highlighted by an emphatic dunk from Jaylin Williams, who then exited the game for the next couple of possessions with leg cramps.

Taylor hit another 3-pointer to trim Arkansas' lead to a point. But shortly after checking back in, Jaylin Williams' fadeaway jumper with 13 seconds left put the Razorbacks ahead by three.

Au'Diese Toney scored 12 points and grabbed six rebounds for Arkansas, which avenged a road loss to the Texas AM two weeks ago to split the season series.

Quenton Jackson finished with 13 points for the Aggies before fouling out in overtime.