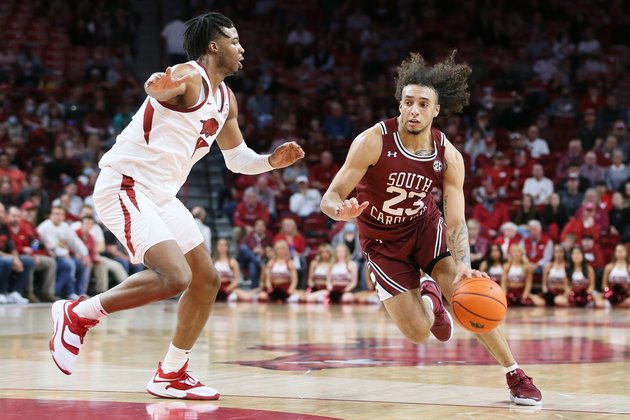 Both teams may be short-handed when South Carolina hosts Vanderbilt in a Southeastern Conference rematch Wednesday night in Columbia, S.C.

Carter has started the last two games but played less than 10 minutes against Georgia on Saturday after an injury that was first thought to be to his hamstring. The Columbia State reported Monday that tests revealed no issues with the hamstring.

Carter had given the Gamecocks a much-needed jolt, scoring 20 points in South Carolina's 75-59 loss at Arkansas and seven in his short stint during the 83-66 win over Georgia that snapped the Gamecocks' three-game losing streak.

A transfer from Minnesota, Robbins has yet to play for the Commodores but Chatman, a transfer from Dayton, was a key contributor in Vandy's 75-74 upset of Arkansas. The Commodores have lost four of their last five games since, including a 72-70 loss at home to South Carolina that started the skid. That was Chatman's most recent appearance.

The Commodores lost 61-42 to Florida last Saturday, going without a field goal for nearly the last 11 minutes of the game.

"That isn't who we've been in most of our outings this year," coach Jerry Stackhouse said.

The Gamecocks trailed Georgia 42-36 at halftime but outscored the Bulldogs 47-24 in the second half behind big performances by Erik Stevenson, Keyshawn Bryant and Jermaine Couisnard. After scoring just five points each in the first half, they ended with 20, 19, and 15, respectively, for the game.

Coach Frank Martin said he challenged his Gamecocks to show more fight in the second half, and they responded.

"This last three weeks is going to make us a much better basketball team," he said.