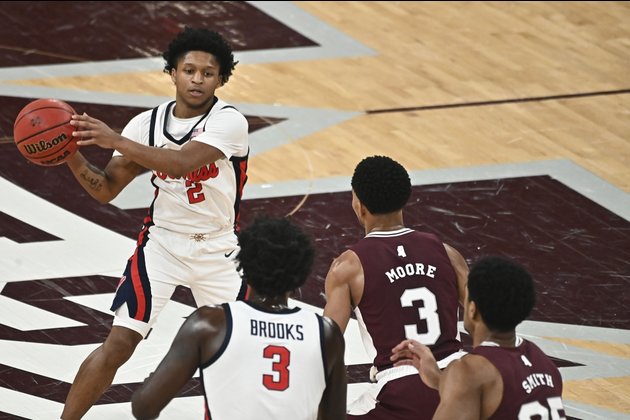 Daeshun Ruffin's breakout game has given Ole Miss hope as it prepares to host Arkansas on Wednesday in the middle of a three-game homestand in Oxford, Miss.

With his team having lost four straight and six of its past seven, Ruffin spearheaded the offense by tallying 15 of his 21 points in the second half against Florida on Monday, breaking a 22-22 halftime tie and ending the Rebels' recent bad run in a 70-54 rout.

A McDonald's All-American recruit -- Ole Miss' first -- Ruffin drove the lane to produce his own layups and often dished to Matthew Murrell (20 points, 8-of-12 shooting) and Nysier Brooks (11 points, 5 of 6) in the sizzling 20 minutes.

Following the Rebels' 48-point half in the streak-ending victory, Ruffin's stat line showed a career-high 21 points, six assists and four steals in 33 minutes. He made 9 of 10 free throws.

"We made it a focus where I'm going to come into practice and I'm going to be a leader," said Ruffin, a 5-foot-9 native of Jackson, Miss. "I credit our vets because they put the pressure on me to do it, and they believe in me that I can do it, so I'm just thankful for that confidence."

Ole Miss will have to contend with the feisty Razorbacks (14-5, 4-3), winners of four straight in the SEC after dropping their first three conference games.

Of special concern will be Jaylin Williams, who was named the SEC's co-Player of the Week after averaging 16.5 points and 10 rebounds in the team's recent run.

"He keeps getting better every day," JD Notae said of Williams. "We rely on J-Will to do a lot of stuff you don't see in the box score."

Notae is the SEC's leading scorer at 18.6 points per game.

Arkansas leads the all-time series 48-35, reeling off three straight wins and seven in the past eight meetings dating back to 2017.