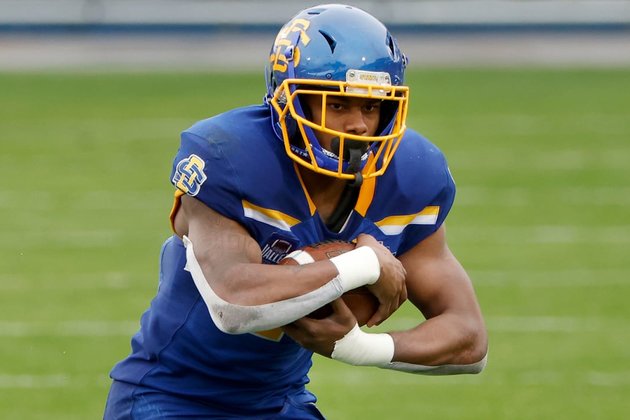 Patriots have a Strong candidate to continue pass catching tradition

Running back Pierre Strong may be the next in line to fill the passing back role in New England.Paul Perillo

The Patriots offense has morphed into various versions throughout the years but one constant of the Bill Belichick era has been the presence of a capable running back in the passing game. It started with Kevin Faulk and transitioned to the likes of Danny Woodhead, Shane Vereen and currently James White.

It's quite possible that Belichick found his next one in the draft when he selected South Dakota State's Pierre Strong in the fourth round.

Strong is a 5-11, 207-pound bolt of lightning who blazed his way to a 4.37 40 time at the Combine, which was tops among running backs in Indianapolis. While he wasn't used all that often in the passing game in college, his running backs coach Andre Crenshaw believes he has the ability to perform those roles immediately in the NFL.

"Let's start with his pass catching ability," Crenshaw began as he explained why he felt Strong would be suitable for the role. "He can run routes like a receiver. You can put him out there in the slot. He's a natural pass catcher. Even with the deep ball he has the ability to adjust as a receiver. He creates matchup problems for linebackers and safeties trying to cover him."

Despite those words of praise, Strong managed only 62 receptions in his four years with the Jackrabbits, and just 22 as a senior. But rather than using that as an indictment on Strong's ability, Crenshaw put the blame on himself and his fellow offensive coaches for not using him more frequently.

"We didn't use him as much as we wanted to in the passing game," Crenshaw explained. "We created issues for teams when we put him in motion and we should have done more of it quite frankly. But we opted to give him more carries and we had some concerns about his workload, so we tried to manage things a bit.

"But anytime we gave him the opportunity to perform in the passing game he showed soft hands and the ability to get open. I have no doubt he'll do the same with the Patriots."

Not unlike most rookie running backs, the one area where Strong may need to improve is pass protection. Crenshaw explained that early in his career there were some struggles in that area, but after the coach challenged him to improve his technique, things progressed.

"I told him at the beginning of last season that if you want to be an NFL running back you can't have these things on film," Crenshaw said. "He took the challenge and improved immensely. He wasn't afraid to throw his body in there and be physical. If it was a dire situation where we absolutely had to have a play, and he was responsible for picking up a blitz, I wasn't worried about him at all. In fact, our quarterback was young and inexperienced and Pierre would adjust the protections for the offensive line and make sure we were prepared properly.

"I always tell him pass protection is the biggest thing they want you to learn. If you can be really good at it that's the way you get on the field the quickest. That's what his niche will be."

While Strong may be a candidate to replace White one day, he enjoyed a stellar career at South Dakota State running the football. His one-cut, downhill style created a lot of big plays for the Jackrabbits, as evidenced by the 27.3-yard average he compiled on his 40 career touchdown runs.

Strong finished with 4,527 yards rushing and an impressive 7.2-yard average per carry. He wasn't necessary the type who would move the pile between the tackles, but on extended zone runs to the perimeter he showcased the vision and speed to stress the defense on the edges.

"As a running back he's smooth and explodes to the hole with great acceleration. He's a definite home run-hitter," Crenshaw said. "We were lucky because of what he did offensively. That made it easier to do what we do. He's a competitive person who works extremely hard. I've never coached a guy who practices as well and as hard as he did. Everything he did from a practice standpoint was at a high level.

"All we would do was try to find ways to get him out in space. Giving him as many lanes as possible. Allowing him to use his vision and setting up his blocks. That allowed him to make guys look real bad."

One of the questions surrounding Strong as he enters the league is the level of competition he faced. Playing for an FCS program did not allow him many opportunities to face the iron. Strong told reporters after he was drafted that his performance against FBS Colorado State when he rushed 10 times for 143 yards with a pair of touchdowns answered any lingering questions.

"I was geared up for him to have a big game just because of his preparation," Crenshaw said. "Everything about him was different going into the season. He looked good and felt good and was fully healthy. He has a bit of a chip on his shoulder because he wasn't highly recruited. You see where he is now and the work that he put into it and it's crazy to think more people weren't after him.

"I think he has a chance to be productive for the Patriots right away."

With White still hampered by the serious hip injury he suffered early last season, Strong may get a chance to prove that sooner rather than later.

Strengths: Great speed makes him a legitimate big-play threat (10 career TD runs of 50-plus yards) ... Great vision to find running lanes ... Cuts well at full speed ... Shows good lean and pad level ... Really elusive in the open field with his ability to cut and find space ... Will hit the hole before looking for cutback lanes to make big plays.

Weaknesses: Undersized for a heavy workload and frame isn't suited for much growth ... Doesn't always finish his runs with authority ... Doesn't break many tackles ... Runs a bit indecisively at times ... Five fumbles in 2021 led to questions about his ball security ... FCS competition hasn't prepared him for NFL ... Limited use in passing game.

Personal: Earned All-State honors three times and was Class 5A Offensive Player of the Year at McClellan Magnet (Ark.) High School ... Was a member of the All-USA Arkansas Football Team ... Finalist for the Landers Award, given to the top high school football player in Arkansas ... Competed in track & field as well ... Finalist for the Walter Payton Award in 2020 and 2021 ... Twitter handle is @pierrestrongjr. ... Went 9-for-9 for 208 yards and six touchdowns as a passer at SDSU ... Notched 40 career rushing touchdowns, averaging 27.3 yards per touchdown.

Comparable NFL player: Tevin Coleman, N.Y. Jets - Versatile veteran running back with the ability to contribute as a runner and receiver.

NA-RBs did not participate in drills at Combine

"You want to see an FCS back be dominant on that level and he has tape where he does that against that competition. He definitely has NFL talent." - Anonymous NFC scout