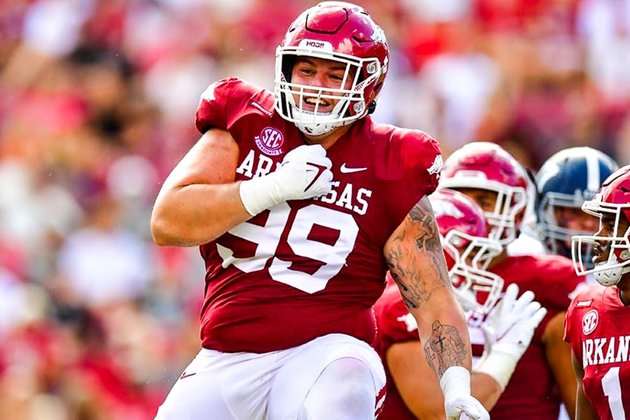 Why John Ridgeway Is A "Unique Pick" For Dallas

Last October, after the University of Arkansas ended a nine-game losing streak to Texas A&M at AT&T Stadium, Ridgeway met Cowboys owner/general manager Jerry Jones briefly on the field as the prominent Razorbacks alumnus presented the Southwest Classic trophy to the team.

"It was pretty cool," Ridgeway said. "I told him right then and there, 'You got to draft me. Watch, and I'm going to take over the Dallas Cowboys.'

Six months later, the 23-year-old defensive tackle is in fact a Cowboy, drafted in the fifth round with the 178th overall pick.

Actually, the Arkansas connection means next to nothing to the Cowboys' draft process. Ridgeway is just the second Arkansas player drafted by Dallas. The first, running back Felix Jones, arrived in 2008 -- almost 20 years after Jones bought the franchise.

The biggest reason for drafting Ridgeway isn't the school he attended. It's the measurements on his school bio:

Looking to shore up their run defense, the Cowboys have shifted toward larger defensive interior linemen the past two drafts. Last year's sixth-round pick Quinton Bohanna (6-4, 327) played roughly 20% of the snaps as a rookie, posting 12 tackles and one pressure. Ridgeway will have a chance to compete for a spot on early downs, too.

In 2020, the Cowboys allowed the second-most rushing yards in franchise history (2,541). Last year was a noticeable improvement under new defensive coordinator Dan Quinn. The defense

But the last image of the 2021 season was the first-round playoff loss to San Francisco, in which the 49ers racked up the second-most rushing yards against Dallas the entire season (169).

Run defense is still an emphasis this offseason, and perhaps Ridgeway can emerge as part of the solution.

"He is a unique pick for us, relative to how we pick most years with the Dallas Cowboys," Jones said immediately after the draft. "We usually have lesser size and more quickness. Bohanna has that, but of course long with the size.

"I'm really good (with the pick) because with our defense against the running game, I've always held my breath on getting big-boyed in there. This is a real statement in my mind with Dan and (head coach) Mike (McCarthy) as to how we are going to address the run game when we get into the playoffs, which we are sure to have.

"Mike was sitting there all day going, 'Playoffs, playoffs. Remember the playoffs.' That really is not only a great pick, but he is also a hell of a competitor."

Ridgeway had 141 tackles (12 for loss) in 42 career college games at Arkansas and Illinois State. He transferred to Arkansas as a redshirt senior in 2021 and started 11 games as a fixture on the defensive front.

Ridgeway said he spoke with the Cowboys at the Senior Bowl in January and the NFL Combine in March. And, of course, there was that brief visit with Jones last October, when Ridgeway predicted wearing a star on his helmet.

Now he'll try to earn a spot in the lineup this spring and summer.

"They're going to see the hardest working D-lineman on the field every time," he said. "That's the plan."