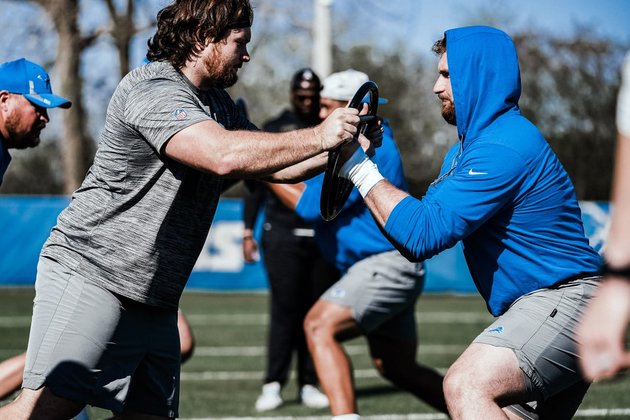 O'HARA: Lions stand pat at OL due to position's strength

The Detroit Lions' offensive line was relatively untouched in the offseason free-agent signings and draft, and that was not an oversight.

It was a recognition of the unit's strength.

The Lions have spent heavily with high draft picks, contract extensions and one substantial free-agent signing to build the offensive line.

The result: The Lions have one of the NFL's best offensive lines. Assuming everyone stays healthy in 2022, it could be a Top 5 unit that can protect quarterback Jared Goff and open lanes for the running backs.

While it is the bedrock of the offense, that foundation splintered in some key areas because of injuries in 2021.

The Lions had to rely on backups who handled themselves well in starting 28 games.

The offensive line has benefitted from the leadership of assistant coach Hank Fraley. A starting center for 11 NFL seasons, Fraley came to the Lions as assistant line coach in 2018.

He took over the unit in 2020 and has used his experience to develop a cohesive unit.

Here's a look at how the Lions have built their offensive line:

Left tackle Taylor Decker: Drafted in the first round and 16th overall in 2016 and has since signed a long-term extension.

A solid, dependable player who is held in high regard by teammates who have often said he deserves to make the Pro Bowl.

Decker has played all 16 games (before the 2021 17-game schedule) three times and 15 once. Twice he had his season shortened because of fluke injuries sustained in offseason workouts and in practice before the opening game.

Center Frank Ragnow: Drafted the first round and 20th overall in 2018 out of Arkansas and since signed an extension.

As a rookie, he played left guard -- a position he had never played before. Moved to center in 2019 and has excelled at his natural position, making the Pro Bowl in 2020.

Fully recovered from a toe injury that caused him to miss 13 games in 2021 and ready to resume his role as team leader and one of the NFL's top centers.

Right guard Halapoulivaati Vaitai: Signed as a free agent in 2020 after four seasons with the Eagles.

Originally expected to play right tackle but has spent most of his two seasons in Detroit at guard. Committed only one penalty in 2021.

Left guard Jonah Jackson: Drafted in the third round and 75th overall in 2020 out of Ohio State.

Jackson is rapidly rising in stature. He made the Pro Bowl in 2021 as an alternate.

He played his first four seasons at Rutgers. Rather than enter the 2019 draft, Jackson transferred to Ohio State for a fifth season to experience playing in important games and practice against elite teammates.

Right tackle Penei Sewell: Drafted in the first round and seventh overall out of Oregon in 2021.

GM Brad Holmes celebrated in the Lions' draft room when he was able to get Sewell in the first round. Sewell was regarded as a potential All Pro lineman going into the draft, and he showed those traits in his rookie season.

Sewell was scheduled to play right tackle, but he opened the season at left tackle to take Decker's place when he went out with a finger injury sustained in practice.

Center Evan Brown: Signed to the practice squad in December of 2020 and promoted to the active roster for the last two games, Brown played 16 games and started 12 in 2021.

Tackle Matt Nelson: Signed as an undrafted free agent from Iowa in 2019 and converted from defensive line to offensive line, Nelson played 13 games and started 11 in 2021.

Center Ryan McCollum: Signed off the Texans' practice squad, McCollum played 13 games with one start for the Lions.