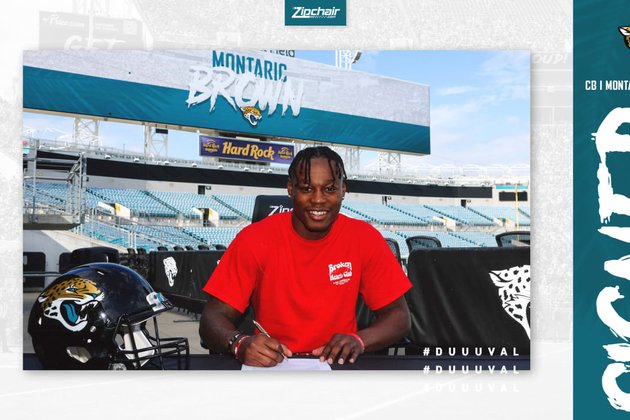 JACKSONVILLE - It's official: The seventh-round selection is signed.

Montaric Brown, the No. 222 overall selection by the Jaguars in the 2022 NFL Draft, has signed his rookie contract. The team announced the signing Thursday afternoon, a day before the first day of the team's rookie minicamp at TIAA Bank Field.

Brown (6-feet-0, 196 pounds), who attended the Scouting Combine earlier this offseason, played four seasons at Arkansas and started 34 of 43 games played. He finished his career with seven interceptions, including five in 2021. He registered 133 tackles with 77 solos, and also had 16 career pass breakups.

He was a first-team All-Southeastern Conference selection in 2021.

The Jaguars on Thursday also officially signed four other '22 draft selections: Outside linebacker Travon Walker (Round 1, No. 1 overall, Georgia), linebacker Devin Lloyd (Round 1, No. 27 overall, Utah), running back Snoop Conner (Round 5, No. 154 overall, Mississippi) and cornerback Greg Junior (Round 6, No. 197 overall, Ouachita Baptist).