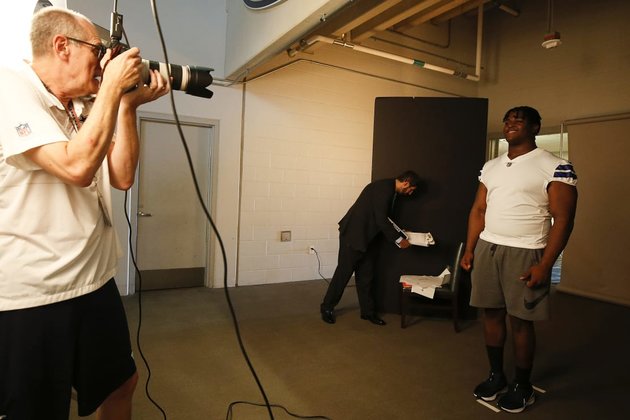 Don't miss any of the action with our daily updates: news, notes and more throughout the Cowboys' regular season. Presented by Blockchain.com

7:05 p.m. - It wasn't Tyler Smith's first trip to The Star, but on Thursday, the first-round pick was around his new teammates as the Cowboys prepare for a rookie minicamp.

Also, Smith is expected to officially sign his contract before the end of the weekend. Gone are the days when first-round picks sign their deals right before training camp. Smith, the No. 24 overall pick will likely sign the deal over the weekend.

Last year, Pittsburgh signed RB Najee Harris - also the 24th overall pick - to a four-year deal worth over $13 million, with a fifth-round option.

5 p.m. - For the second consecutive year, the Cowboys will open the regular season in primetime against Tom Brady and the Tampa Bay Buccaneers -- this time at AT&T Stadium on Sunday, Sept. 11, the NFL just announced. Kickoff is set for 7:20 p.m. Central on Sunday Night Football.

It's a rematch of last year's thriller in Tampa, won by the Bucs 31-29, where Brady and Dak Prescott combined for 782 passing yards and seven touchdowns.

The league has also announced that the Cowboys will face the Packers in Green Bay on Nov. 13.

The full schedule will be revealed at 7 p.m. Central during NFL Network's "Schedule Release '22" special.

In addition to their draft picks, priority free agents and a handful of select veterans, the Cowboys have also invited six rookie tryouts to The Star this weekend for a closer look.

Most notable among those names are two rookie quarterbacks, Nick Starkel and Terry Wilson.

Starkel is trying to break into the NFL after a six-year college career that saw him make stops at Texas A&M, Arkansas and San Jose State. His final two seasons came at San Jose State, where he totaled 3,819 passing yards and 26 touchdowns in 15 appearances. The New York Jets also invited Starkel to their rookie camp, which was held last weekend.

Similarly, Wilson's career began at Kentucky, where he showed potential as both a passer and a runner over the course of three seasons. He finished his time with the Wildcats with 3,436 passing yards to go with 1,015 rushing yards. He wrapped up his college career with one season at New Mexico, where he appeared in six games and threw for 1,058 yards.

Those two draw the headlines, but four other tryouts will be hoping to impress. The Cowboys are bringing in two specialists - another kicker, Simon Mathiesen from Northwest Missouri State, as well as TCU long snapper Antonio Ortiz.

Alex Akingbulu, an offensive tackle from Fresno State, and Duke running back Nakeie Montgomery round out the list.

10:23 a.m. - The Cowboys will be back on the field Friday morning for the start of the rookie minicamp, which will feature all nine draft picks, 20 undrafted rookies and a handful of rookies here on a tryout basis.

But also on the field will be about seven players that aren't so new to the team. Players who have been on the practice squad but haven't played in a regular-season game are eligible to practice this weekend.

3:18 p.m. - We don't know the Cowboys' 2022 schedule just yet - the NFL will announce it Thursday night - but we do know their strength of schedule for the upcoming season.

For a quick refresher, here are the Cowboys' opponents without dates or times yet:

Based solely on their 2021 opponents' total record (133-155-1), the Cowboys are tied with Washington for the league's easiest schedule this season.

The biggest reason for that ranking: the NFC East's struggles a year ago. The Cowboys (12-5) clinched the East by a full three games last year. They went 6-0 against the Eagles, Commanders and Giants, who had a combined 20-31 record.

It's entirely possible the division will be improved, though, and it's worth noting that the Cowboys play a first-place schedule that includes games against fellow division champs Tampa Bay and the LA Rams.

But on paper, that's how it stands.

For the third straight year, the Cowboys will get another roster exemption for offensive lineman Isaac Alarcon.

The NFL initially announced its International Pathway Program would be for only two years, the league decided to give those players, including Alarcon a third season.

That means he won't count towards the 90-man roster this offseason. And if he doesn't make the active roster, he could return to the practice squad, also on an exemption.

Alarcon, who became one of the stars of HBO's Hard Knocks last season, played in the preseason last year at guard and will likely continue to work there, but could get some chances to play tackle as well.

12:00 a.m. - Jalen Tolbert, like all draft prospects, is used to fielding a lot of phone calls.

The one he got earlier this week, days before the Cowboys made him the No. 88 pick in the 2022 NFL Draft, was a bit different. Rather than an agent or a scout or a front office seeking to confirm his number, it was none other than Dak Prescott.

"For a minute it was a surreal moment because I never knew quarterbacks would call prospects," Tolbert said on Friday.

It's not common, but it does happen. And in their search for a new weapon to help replace Amari Cooper and Cedrick Wilson, the Cowboys enlisted their star quarterback's help.

"That was a Dak thing," said executive vice president of player personnel Will McClay. "The importance of him to the organization, he reached out. We said 'Hey, here's some guys for you to do your thing with."

The Cowboys declined to elaborate on how many prospects Prescott called, but this one stuck. Tolbert said he and Prescott talked for 20 minutes about football and his role with the Cowboys. As of now, it'll be the first conversation of many.

3:01 p.m. - The Cowboys are taking things gradually with Michael Gallup's recovery from an ACL injury.

Gallup underwent surgery on the torn ligament in early February, after tearing it while making a 21-yard touchdown catch against Arizona on Jan. 2.

The injury didn't prevent the Cowboys from signing their 2018 draft pick to a five-year, $57.5 million contract last month, though the timeline for his return to action is still uncertain.

Cowboys coach Mike McCarthy said Gallup is making progress, but it might have to wait until the team reports for training camp until we'll hear further.

"Michael is doing very well in his rehab. He's here every day. He's been here throughout the prehab, the surgery and now the rehab," McCarthy said. "I think once we get to training camp, we'll have a tighter view on exactly when he'll be available."

12:07 p.m. - Technically the Cowboys' offseason program is voluntary, but it sounds like the team has had close to full attendance since phase one of workouts began last week.

"I didn't do the check myself, but I'm not surprised that everybody was there," quarterback Dak Prescott told reporters last Friday at the Children's Cancer Fund Gala in Dallas.

"You don't want to be that guy that's not building the chemistry or building what we're working for. I think that shows the character of the guys that we've got and credit to the front office and the coaches for getting people that want to be here when it's completely voluntary."

The first two weeks of the program include only meetings, strength, conditioning and physical rehab work with strength and conditioning coaches. Organized team activities (OTAs) begin May 24.